Stores, distribution centers and offices of the retail group, one of the largest in the northern region, are monitored by Axis network cameras 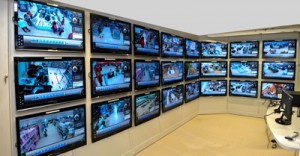 Central monitoring of the Bemol group via Digifort

Bemol is one of the main retail groups in Brazil’s Northern region. With 19 stores and three distribution centers, as well as headquarters which coordinate its successful e-commerce operation, the company has over 2200 collaborators in the three states in which it is present. During office hours, the number of people walking around its hallways increases exponentially, since Bemol has repeatedly been named a Top of Mind company by the population of Manaus (AM). To monitor this flow of people, a high-quality video surveillance project had to be considered. The analog cameras that had been used until then no longer satisfied the group’s demands.

Solution – The integrator RV InstalaĂ§Ăµes created a complete project for the installation of an IP video surveillance solution for the Bemol network. In total, 430 cameras were used, them being 405 Axis M1114 Network Cameras, 16 AXIS M1103, 08 AXIS P1344-E and 01 Axis Speed Dome. All cameras are handled by Digital Professional software, from Digifort, an Axis partner company.

Results – The video surveillance project from RV InstalaĂ§Ăµes exceeded the expectations from Bemol. Right from the first months of use, the system allowed the identification of a number of events in a much greater number when compared to the old analog system. Furthermore, the images also help to optimize operations: it is possible to monitor those areas that attract clients the most, to check shelves that need to be refilled and to know, in real time, which sectors need more sales people, for example.

â€śIn the past, we had a system totally decentralized that demanded frequent maintenance. Presently, we have a solution with a monitoring center, cameras that work perfectly and results that not only help at the surveillance end, but also in the operations at the stores. The manager at our Distribution Center has recently told me that, in six months using Axis, they had already achieved more results than in six years using the other solution”.

Pilot Project – It was the first project by RV InstalaĂ§Ăµes using IP cameras.Â  When becoming aware of Bemol’s needs, the company researched the market and, before offering the project to the client, elected Axis as a partner company. It presented Bemol a proposal for the modernization of its video surveillance system only after it had first attended the training courses provided by Axis and Digifort.

The first step was to implement the Axis camera at a single store, the unit at Bemol Barroso, in Manaus, to evaluate the solutionâ€™s potential. Sixteen AXIS M114 cameras were installed inside the store. After a very short period, Bemol confirmed the efficiency of the network surveillance and request RV InstalaĂ§Ăµes to extend the solution for the rest of the group.Â  Simultaneously, eight additional cameras were installed at the Bemol Barroso store to further extend the surveillance to cover not only the inside of the store, but also its parking lot.

Long-distance monitoring – Presently, the 19 stores – inclusively the recently opened unit at Ponta Negra Shopping, in Manaus – have Axis cameras, as well as three distribution centers and the company’s head office, as previously mentioned in this study. The 23 environments are monitored from a monitoring center, set up at the company’s headquarters, situated at the State capital. From there, remote operators work in a 24×7 scale to analyze all images captured in real time.

The Monitoring Room is comprised of 07 servers and twenty-four 32-inch LED monitors for local monitoring. The camera system is fed via Power Over Ethernet and the cameras have presence sensor intelligence: they continuously monitor the environments, but the images are only recorded when there is movement detected, thus saving storage space. To transmit the images to the center, each unit has a dedicated 1MB link for this task.

Looking ahead to the future, the project’s success has been so great that Bemol has started testing automated night surveillance: the cameras will automatically start to detect movement at those times when the store is closed, triggering alarms and systems to notify the police, the fire department and private property security, as appropriate. In six months, the network cameras have helped to detect more incidents than during the six previous years when the analog cameras were in use.

Digifort â€“ It is the first Brazilian “IP Surveillance” and digital image storage software. Known in the market as an IP Surveillance System, the product carries advanced resources, equipment and technological solutions for the sectors of digital intelligence, corporate surveillance and urban security. It has over 12 thousand customers worldwide, 200 integrated manufacturers and 3500 licensed camera models. Presently, its platform is continuously developed in Brazil, commercialized in over 100 countries and translated into several languages, making the software one of the best in international market evaluations. More information is available on the site www.digifort.com.br.